I have chosen a select few photos that required the most effort to edit, yet seem relatively simple at first glance. (Pictures will take some time to load with slow connections, please be patient)


To begin, here is the picture of me as a tiny mermaid in a vase. 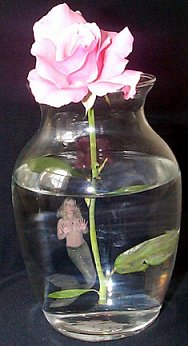 To accomplish this photo, I first needed to take a picture of the vase with the rose in it. 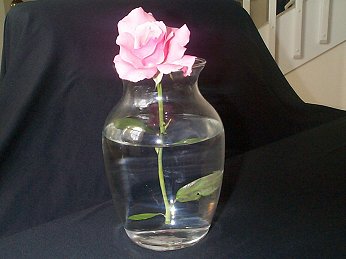 Next, I needed a picture of myself in the proper pose. (I have taken the liberty to crop it a bit for this demonstration). I used a fan to blow my hair in order to make it look as though it is weightless in water.

Then, I needed a picture of a fin that I could paste on me.  I found a picture of a mermaid sculpture on the internet and edited the fin onto my body. (As you see one fin is blocking another in the picture, so extensive editing was needed for the fin to look right). 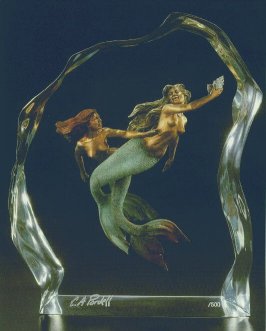 After the fin was placed on my body and the background was removed from the original pose, all that was left was to place myself into the vase.  The detail is so precise that if you look closely, you might notice the color change on my fingertips to make it appear I am pressing on the glass as I peer out. Click here to view finished product.
I love the work of Brian Froud and wanted very much to put myself into one of his pictures.  There was one major problem with this however.....photos are not drawings, and it is quite difficult to match them seamlessly together. Here is the original picture found in Mr. Froud's book titled Good Fairies, Bad Fairies. 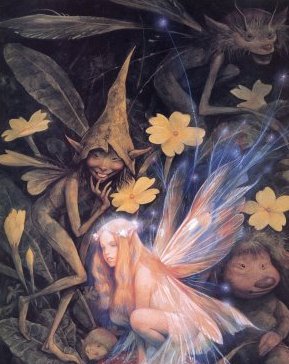 My first step was to take a photo of myself in the proper pose.

After using effects from my photo editing programs, I then altered my outfit and roughly placed myself within the drawing. 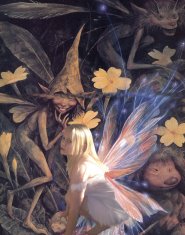 At this point it was still obviously a photo stuck on a drawing.  Using a texture effect found in the software, I then added a texture over the entire picture making it seem less like a rough paste and more like one picture.  After some finishing touches  (like my pointed ears and color effects) the drawing became complete.  Click here to view the finished product.

One other example of me placing a photo of myself into a drawing is the one of me in the poster from the movie Labyrinth.  Click here to view.


Finally, and perhaps the most deceptive of all my edited photos, is this one: 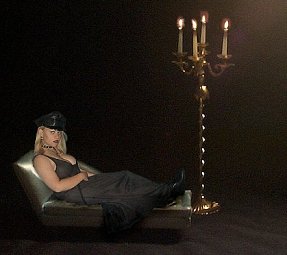 So, what is so deceptive about this picture?  Well, it's the fact that the couch I am sitting on--as well as the candle lamp next to me--is doll furniture.  Yes, tiny pieces of doll furniture.  Here it is, actual scale. (About 6 inches high). 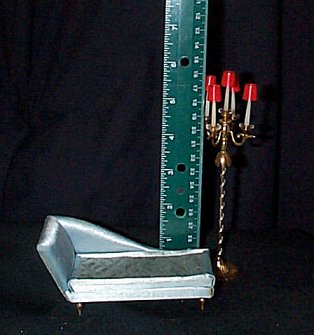 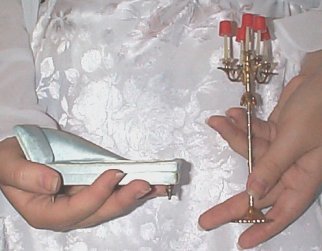 I located this old doll furniture in a box and found myself wishing it was real because it would make a great gothic-themed photo.  I decided to give it a try.  First I took photos of the furniture with special lighting. (Notice how the upper right corner is lit brighter because that is the area the candles would be lighting if the candle lamp were real.) 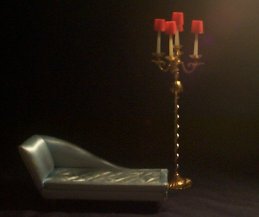 After that I had to pose myself in the position I would be were I actually on the couch. 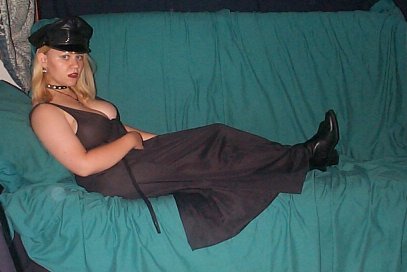 Now all that remained was to put myself on the couch (Altering my colors so I match the dark scene).  I also needed to take the fake looking red covers off the top of the candle lamp and edit on some actual flames.  With all this accomplished, the final picture is born.  Most people can't detect exactly what was changed until I tell them what I did. Click here to view the final product.

And there you have it, a brief look into the complexities of my most extreme work.  That was all done with photo editing programs that severely lacks any of the great editing features of expensive programs.  If I ever get my hands on one of those pieces of software, perhaps someday my photos will be so seamless I won't remember which ones are real, and which ones are only a dream....

Back to Personal Information