These are the first images I ever attempted to edit.  I origionally did not pose specifically to edit myself in, but instead used pictures of myself that already existed.  Only very basic cutting and pasting was used in these photos.

My favorite movie is Labyrinth, and it was my desire to make it appear I was in this movie that sparked the beginning of my photo editing hobby.  This was the origional picture I attempted to edit myself into. Since it was my first try I didn't even attempt to use color, so I converted the picture to black and white.  I then cut out my face and pasted it into the pcture. This is the most simple type of editing .  Even though both the origional and my face are in black and white, the colors still don't match.   I was not content with my face on her body and soon attempted my own body. 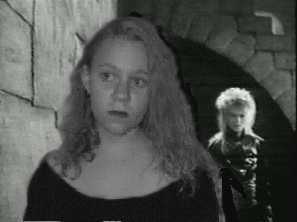 As before, the black and white colors don't match, the picture of me is terrible, and I am not posed specifically for this picture.  For me however, this was a great success as first tries, and I soon continued onto more complex photos obsessed with improving each one.  The following are my continued attempts to get this picture as well as I could make it.

And that was how it began.  An evolution from face to body, from black and white to color, from random pictures to specific posing.  There is no interaction between the character and myself in the early photos, but that was soon to change.